Merry Christmas from the FreeSO Team!

After last night’s flash snowstorm, weather forecasters in Sunrise Crater have been predicting persistent snowfall for the entirety of December, and a large part of January. Unfortunately, this means that residents may be unable to collect their annual christmas trees from the City Hall atop the mountain, and Christmas may be ruined for good. However! The Sunrise Crater government never backs down from a challenge, and has instead delivered all Christmas trees directly to your inboxes, free of charge. These special trees come retrofitted with (refilling???) presents beneath them – 3 of which are sweet treats, and one of which is a special gift for each day… You’ll have to find out for yourself what’s in each box!

Festvities aren’t the only thing we’re bringing to the table this update. Though not much development work has been going on from my side, our community and other developers have been pushing to push the game further to being functionally complete, and even beyond. Here’s a list of all the stuff we have going now, newest first:

Visiting some types of lots will now allow you to fill your motives for a lot longer than other lots. These “overfills” will persist as you move across lots, so are perfect before you run a job, group money, single money or skill. To obtain overfills, go visit a lot from that type and green up in their overfill category. If a lot doesn’t exist for that overfill category, why not make it yourself?

Here’s a list of the tunings we’re demoing this feature with:

Note that this is not all we have planned for other lot types. Several additional systems are in the works to make these categories more appealing or have more of a purpose.

A full serverside infrastructure for uploading, managing and selling custom content may be a long way off, but that hasn’t stopped our community from getting their hands dirty! Using our object development tool, Volcanic, not only have we patched new functionality and translations into existing objects, but users have already created entirely new objects from scratch. These include entirely new slot machines with custom UI graphics (and a themed painting for the newest one!), as well as objects that you might find under your Christmas tree…

This Halloween, I created an NPC with Volcanic which would serve as a proof of concept for the kind of complex NPC and object functionality we could potentially add to the game. This mainly existed for fun, but the object itself was promising – the skeleton drove its own AI for detecting certain classes of game object and performing interactions with them, without using the normal Free Will system which limits sims to doing rather normal actions. More complex creations could be coming in the future – either from me, or anyone else willing to try out SimAntics scripting.

In the last post, I outlined some issues with our automated mesh generation that you probably noticed yourself looking at the video or playing the game. These meshes typically also consisted of many different parts with textures from different rotations, so they take many more draw calls to render than models in typical 3D games. One of the solutions to this problem was for users to recreate the meshes of the objects in the game from scratch, either by using the game sprites to supply texture to their custom meshes or by drawing their own textures from scratch.

The response from the community has been fantastic, multiple users have started remeshing game objects that the reconstruction didn’t do justice – sometimes even entire object sets. Object reconstruction is usually discussed in our Discord server, where we’re more than happy to help you get started with meshing if you’re interested in helping. 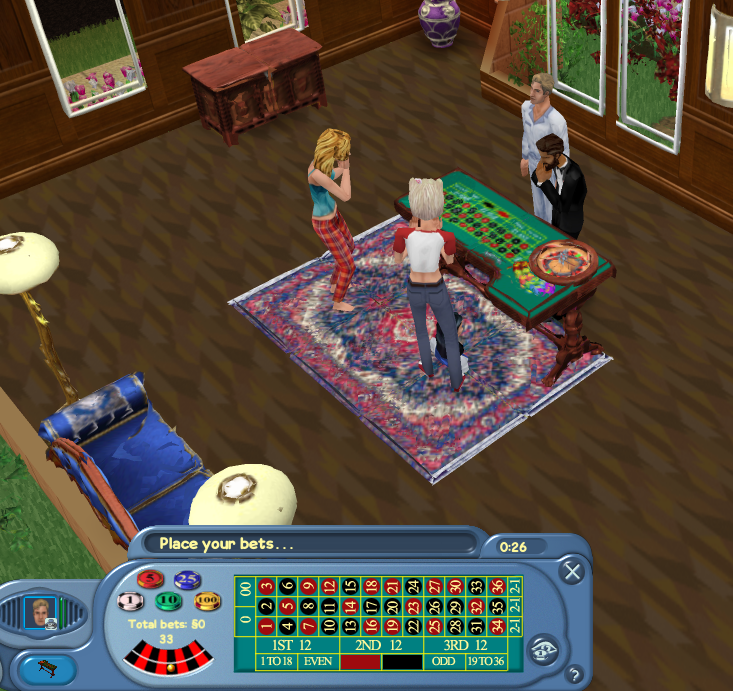 Developer The Architect has struck again, with an incredibly clean implementation of one of TSO’s most complex plugins. This object lets you play roulette with a few other sims at entertainment lots, and gives casinos a lot of character. Bet you can’t wait to see what he has next in the pipeline! :scream:

If you’ve been keeping track on the discord, Simitone for Windows has recently updated to support Build and Buy mode (including simless build/buy) and a work in progress CAS (can’t save families). In a short while the game should also support saving, though it might still be fun to check out if you want to mess around with building TS1 lots in 3D. (note that builds of the game will never be available on iOS)

3D mode was not only developed for the promise of playing TSO in 3D – if the reconstruction proved to be inaccurate or too ugly for the game to be playable in that state, then the 3D meshes could be used for another purpose – detailed sun and point shadows. The results are really cool, and people have been really putting the lighting to use giving their lots some real atmosphere.

The advanced lighting works in 2D and 3D, but the clean look you get in 2D is rather hard to beat here. Maybe with more remeshed objects, 3D can come close to comparing with the original 2D sprites.

FreeSO for Windows… on mac 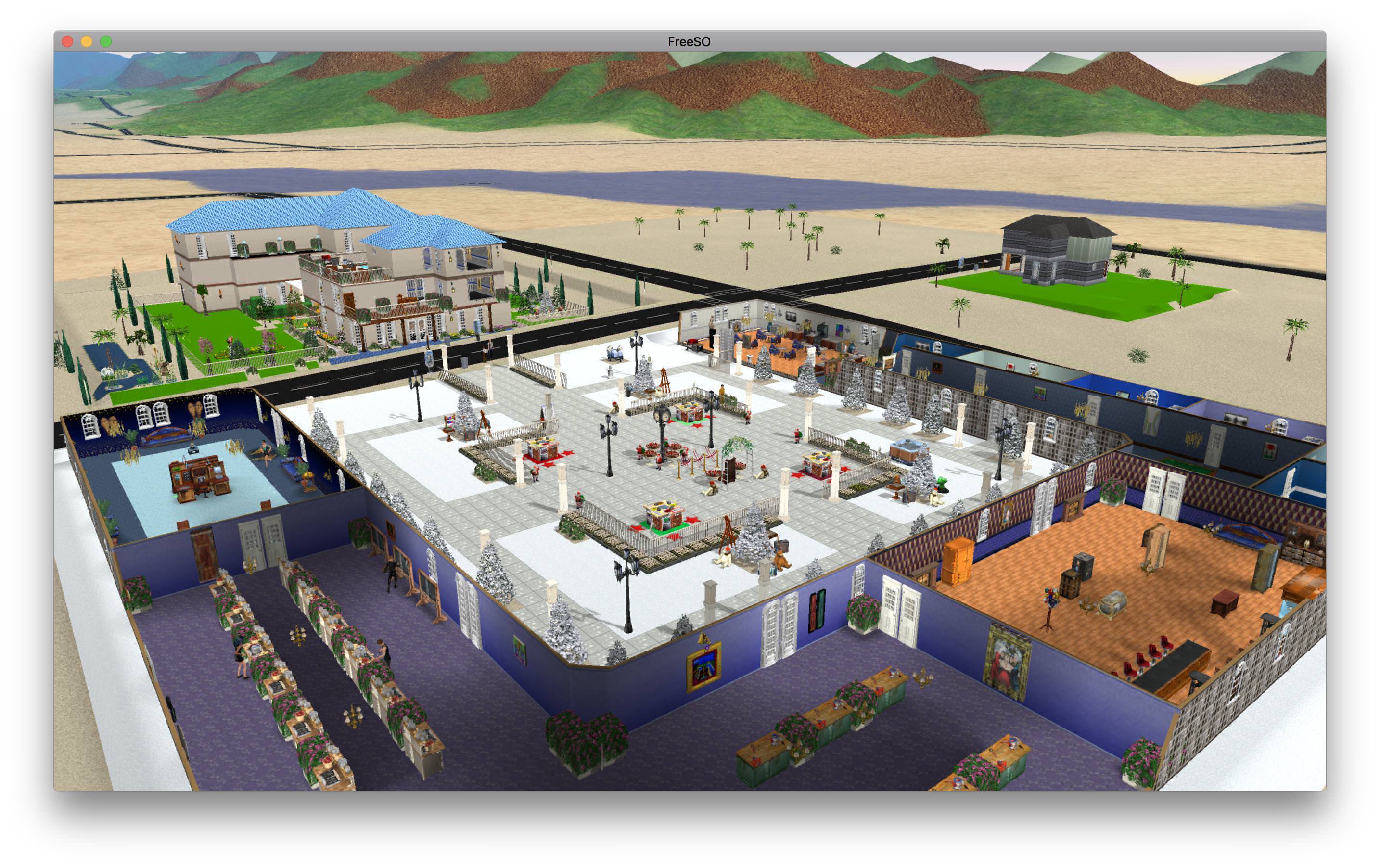 A few weeks ago, I discovered that it is actually possible to run our windows builds on mac, so long as you aren’t afraid of using the terminal to run Mono, and manually extracting some replacement libraries. However, the solution works even with game updates, which means that once you set it up you’re good to go!

Note that this is not an official mac release, this is simply a rather complex way of getting the Windows build of the game to work on another operating system by utilising Mono. The game now also works on linux, though I haven’t tested a methodology to that myself.

With this update to FreeSO, we have enabled two new experimental features. The first is a transaction logging system, which should log recent transactions from payout objects and from sim to sim, for analytic purposes. The second is a dynamic tuning system, which pulls tuning values from our database when lots are opened, and sends them out to players without them having to update their client. This second feature is currently mainly being used for motive overfill tuning, though it can actually be used for any tuning value in any existing object, including payouts for single and group money objects. We can even set up a system to dynamically vary tuning like this based on the transaction data we have collected, making less appealing skills pay out more money to make up for it. After we’ve collected some data, you should see this system rolling out, alongside more quality of life changes for unpopular lot types. Stay tuned!

8 thoughts on “Merry Christmas from the FreeSO Team!”