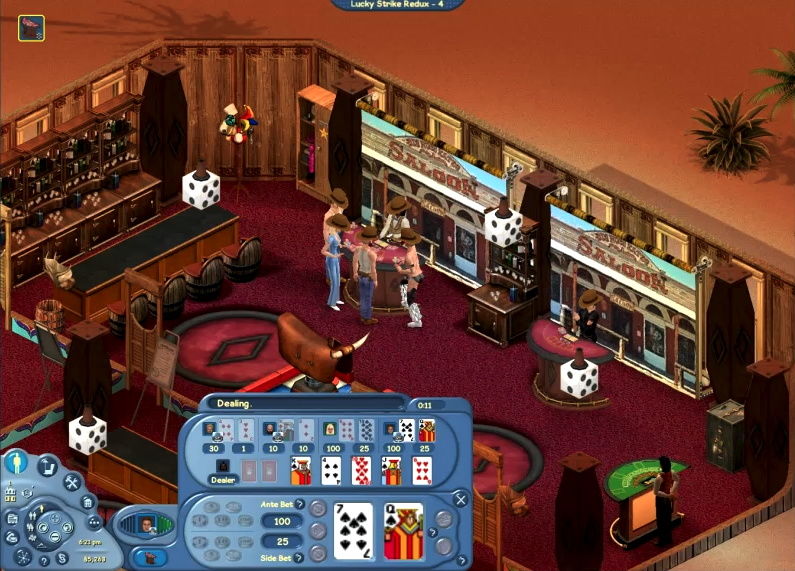 Surprise! We have a special update for you – and it’s not even what we were teasing in the last blog post! It will release in a few hours, along with the announcement of a whole new class of object and a long awaited one. A blog will follow shortly after explaining everything – so stay put… in the meanwhile, we can go into a bit of detail about how this crazy project came about, the effort that went into it, and how the game actually works.

Texas Hold-em is coming to FreeSO, thanks to the efforts of everyone on the team! We’re also releasing a new set of objects tailored to casino environments, as you can see above, which you can get from the in-game catalog. You can even get virtually plastered at the bar – a perfect casino experience.

Long, long ago in the far off time of October 2017, after a joking back and forth with one of the admins I was recruited for an extra special secret project. 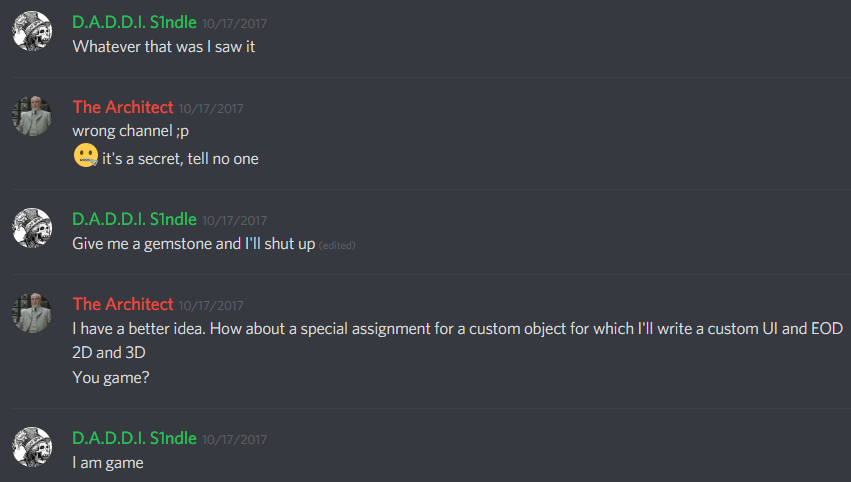 The Exchange that started it all.

The extra special secret project was a collaboration between The Architect, M.O.M.I. Raeven, and myself, we were going to create a clone of the unused Blackjack table, give it new art assets and gameplay, and turn it into Texas hold ‘em. My task was to create the art assets necessary for the object while Architect and Raeven worked on the underlying code to make the object actually function.

A brief timeline of the creation of the Texas hold ‘em table, from early conception to first version.

Since the object was to be a clone of the Blackjack table and would recycle the animations and much of the code I had to keep the new Texas hold ‘em table within the same basic blueprint to make it work with the animations better. I had originally had it set at a normal table’s height since I did not know how tall the actual Blackjack table was. And overtime you can see how it morphed into its final form.

However it was decided that the original Blackjack table would be a higher priority since it was missing much of the code needed to make it work, and so efforts were shifted to that, in fact it was missing so much that the table had to essentially be remade from scratch, which Architect and Raeven did so very beautifully. At the same time it was also decided that in order to get some Custom Content out faster the Texas hold ‘em table would be shelved for the time being, this lead to the creation of two new slot machines, two taxis, christmas pudding, and a few other miscellaneous objects.

Back in January I came up with the idea of releasing several objects alongside the Texas hold ‘em table, in a set I referred to as ‘High Roller Stuff.’ This set was set to be expansive, with tables, chairs, and many other objects. However most of them ended up being cut to save on work time, gone was the coffee table, end table, buffet table, dining table, shrimp platter, dining chair, bench, tip jar, and trash bin, and alongside work on this set I set out to revise the original Texas hold ‘em table since at this point I had changed the techniques I used for modeling and texture painting, and ended up with the version seen in-game. 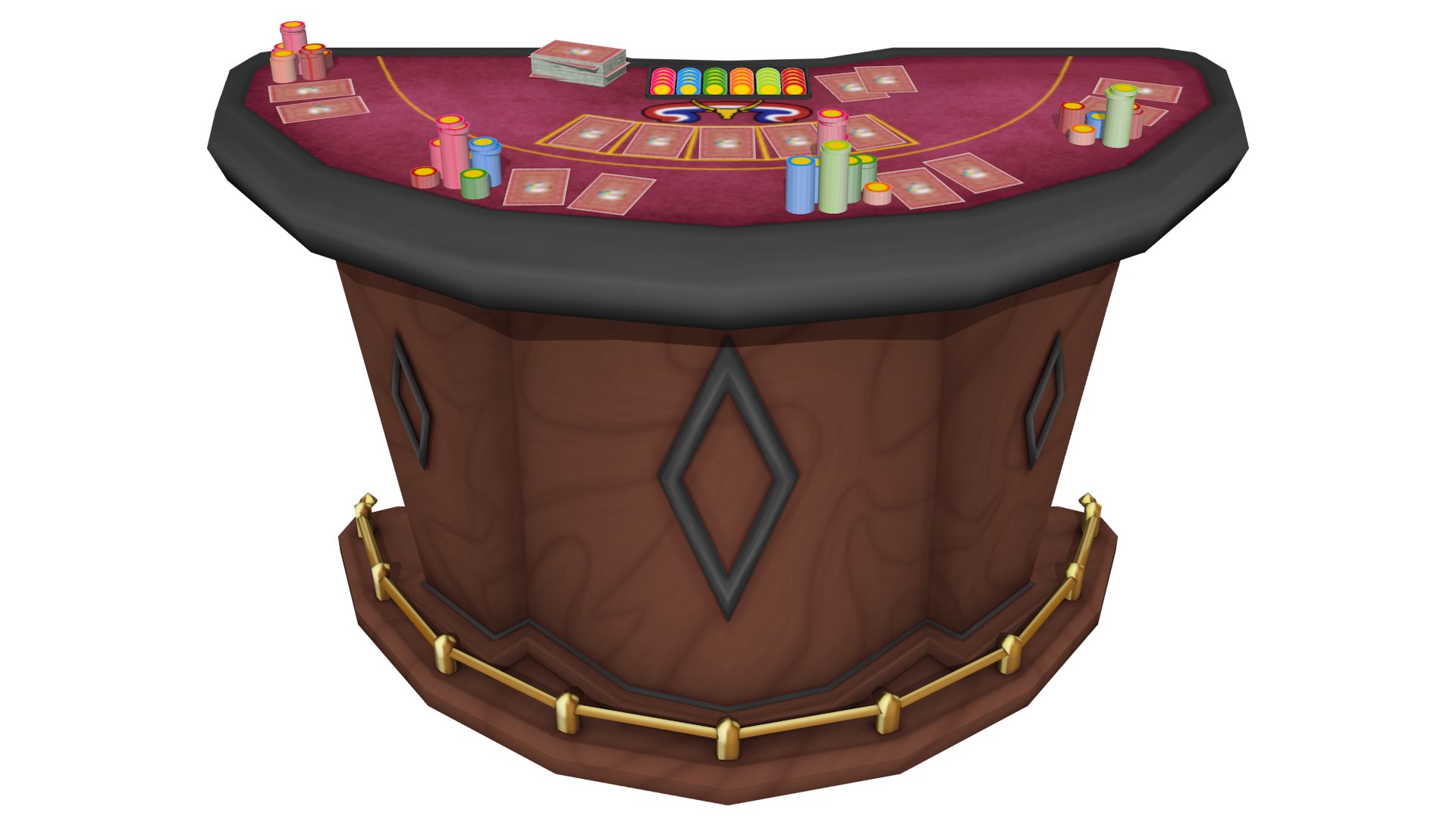 The whole point of this set of objects as decided by Architect, was to show to the community at large that custom content was indeed possible with a little bit work and some elbow grease, and alongside the release of the set came a guide on creating your own custom content for FreeSO written by the amazingly fantastic M.O.M.I. Raeven, and a guide on creating EODs written by the also amazingly fantastic Architect.

How to Play (written by Fawn)

Similar to poker, the goal of Texas hold ’em is to have the best poker hand on the table. However, in Hold’em Casino all you need to have is a better poker hand than the MOMI dealer. This means your friends can stay your friends, and you will not have to worry about practising your poker face in the bathroom mirror. A poker hand is a set of 5 cards that contain combinations, for example pairs, four of a kind or a royal flush (a list of these can be viewed on the items “Learn to Use.. Payout” option). In hold ’em there are up to 7 cards that your poker hand will be selected from.

Start off by choosing your betting amounts. There are two kinds of bets you can make in hold ’em. Firstly, is an “Ante” bet. This is your mandatory bet towards having a winning poker hand. Think carefully about how much you want to bet as if you decide to “call” (explained later) you will have to pay twice the amount of your Ante bet, on top of your initial bet. You can also play an optional “Side” bet which we will discuss in a moment.

After placing your bet, the first round of cards will be dealt out. All players (including the dealer) will receive 2 cards. Next, 3 community cards will be placed in the centre of the table. The dealer’s cards will not yet be revealed, so you will have no idea what their poker hand will consist of. If you initially placed a side bet and your 2 cards plus the 3 community cards contain any poker hands (this will be automatically calculated and must be a pair of aces or higher), then you will instantly win that bet!

Now comes the tough decision, do you fold or call? If you think your hand could be an even bigger winner, you can call. This will force you to pay double on top of your initial Ante bet, however the 2 final community cards will be flipped over, meaning out of the 7 available cards your chances of having a poker hand are much higher. Any winning hands are automatically calculated and paid out. If you do not want to risk calling because your hand is terrible, you can fold, which removes you from that round and your ante bet will be lost.

So put on your cowboy hats and smash your piggy banks! The real question is, are you feeling lucky?

And now all is said and done, the Texas hold ‘em set has been released into the wild for all to enjoy. But what comes next? Well… 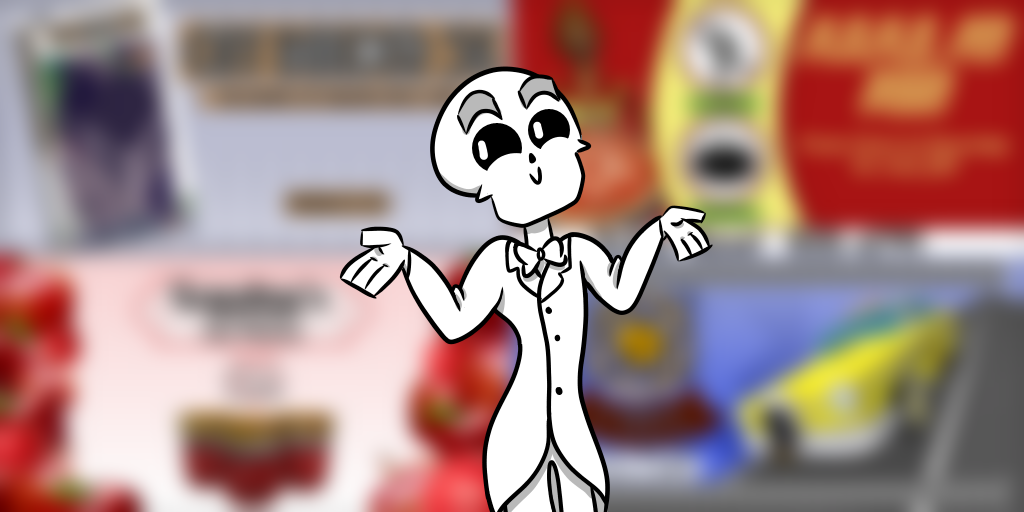