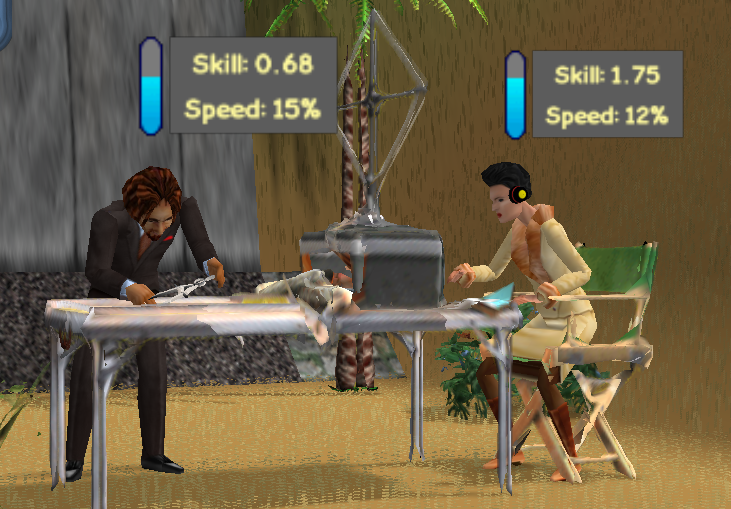 Hey everyone! While I’ve been busy working on a large feature myself, the rest of the team (mainly The Architect, S1ndle and Raeven) added two large features without my input at all – and they are absolutely wonderful! I didn’t want to delay these features, so they have been slowly been developed and refined in our GitHub repository on top of the last master build and thus can be released before I’m finished my own work, which still might take a while! Fawn has also partially joined the team to help with writing ingame dialogs, news posts, blog posts and is also helping out over on http://tsomania.net. Check out her new guide on building a successful house!

The second large feature we’re adding this patch is really the start of something new: Group Skilling Objects. While earning money in The Sims Online has always given players a choice in how active or passive they want to make cash, skilling has always been passive regardless. While veteran players, many newer players interested in group money or jobs were forced to skill passively, when they wanted a more active game experience more of the time.

With Group Skilling Objects, we’re offering the same passive/active choice that money has had since the start of FreeSO – with a twist giving it a key use in the late game for players with high skill, but wanting to reach their maximum payout potential. This should finally bridge this gap that more active players have been looking for, while allowing players who enjoy single money and skill to continue doing as they do. Everyone wins!
The first of these objects is none other than Maze, which has been converted from a money object for important reasons we’ll go into later in this post.
Group skills work as follows:
These benefits are an upgrade over single player skilling objects, but similar to group money, they are not a replacement. The decision is up to the player – a more active, focused experience for a quicker skilling path for more active players, or a more passive experience for players who just want to gain skills while chatting, working in the background or hanging out.
We’re launching group skill with two objects:

Due to one of the many technical developments since 2003 (screenshots being easy to share, which does not make the game any easier but can make it essentially 1 player), Maze’s original game design can be broken even easier than is was back then, where they used preset mazes that could be macro’d. Our maze implementation generates entirely random mazes every time, with the exit a guaranteed and known distance range away from the start point. While our changes to maze to generate random mazes mitigate some of these issues, the original maze design is still too breakable to award something as permanent as money.
However, we’re a re-implementation project, and the original maze didn’t deserve to die any more than TSO did. Due to skill and motive decay making the benefits of group skill objects transient, a group money object awarding these benefits sits a lot better than one that could be abused for a permanent advantage. While the abuse might be minimal due to maze still being as difficult, it’s more a factor of its affect on player morale more than anything.

A variant of maze will be introduced in future with the Gameplay rethought to be more resilient against modern tech, as I have stated in the past. We’ve dubbed this “Maze 2.0”, and will be revealing more details in the future. The money group object rectangle will be complete!
Additionally, for Maze and our next feature, you will be able to toggle their new and old behaviour on a server level some time in the future. If someone capable were to take the game in a different direction, and even just go full vanilla, they should be able to do that by the time we launch. This is a re-implementation project first and foremost, after all. This distinction will let us go our own way with game changes, as we have been, to freshen things up and try our new ideas that TSO/EA Land never would had the chance to.

I think I’ve spoiled enough about what I’m still working on, so I’m going to leave you hanging there. I will end with two extra announcements: the first is that we will be moving the server software to .NET Core rather than Mono, which should provide more reliable memory usage and performance in line with what we test on our Windows development machines.

The second announcement is that you can now choose your reaction to player interactions before they occur. Now you can finally hot kiss 100 times without even pausing for a moment.